skip to main | skip to sidebar

In this installment of the Blackcat Book Club, I review the true crime novel Murder of a Herkimer County Teacher by local author and paranormal investigator Dennis Webster which is about the 1914 Jean Gianini murder case where Gianini stood trial for murdering his teacher Lida Beecher. The case is actually considered to be one of the first schoolteacher murders in American history. It was also the first murder case to deal with mental illness and the Binet Test was used in a murder trial for the first time.

So what does this have to do with Chester and Grace? Well, as it turns out. Plenty. For example, the same judge that presided over the Gillette case (Irving Devendorf) also presided over the Gianini murder case and one of Chester's defense attorneys, Charles Thomas served as a prosecutor in the Gianini case. There was also the fact that Gianini stayed in the same cell in the 1834 Herkimer County Jail that Chester stayed in during his trial eight years earlier. There was also the fact that Gianini idolized Chester. At one point, Gianini even bragged about wanting to be a railroad brakeman like Chester was before the latter moved to New York state. However, while Chester went to the electric chair, Gianini on the other hand was found not guilty due to insanity and spent the rest of his life in mental institutions living to be ninety years old.

All in all, this book is a pretty good read. If you live in the Central New York area, it is available at your local historical society. It's also available at Amazon and also through its publishing company historypress.net where you also get it as an e-book.
Posted by Unknown at 9:34 AM No comments:

Chester, Grace and Me: Revisiting a Murder That Won't Die

It's been so long since I've posted on here but I have decided to share a link to a story I did last year for my main website where I decided to revisit my experiences with the Chester Gillette case.


The story, which I have called "Chester, Grace and Me: Revisiting a Murder that Won't Die" can be found at this link: https://blackcatloner.com/2015/08/11/chester-grace-and-me-revisiting-a-murder-that-wont-die-2/
Posted by Unknown at 3:59 PM No comments:

Here is the video version of the blog post I did for associatedcontent.com about Roxalana Druse. I uploaded this to YouTube around Halloween which in fact turned out to be timely because it isn't Halloween without a scary story, especially if it is a true story. I am planning to do a couple of videos on Chester and Grace in the near future so keep your eyes out for that. So, enjoy.

Posted by Unknown at 9:52 AM No comments: 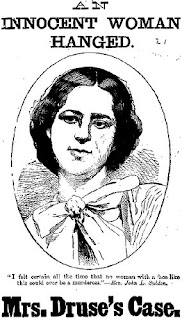 I know it's been a while since I posted on here, but since this story is kind of relevant to the Chester Gillette case, I decided to post this story that I wrote on my blog on Wordpress on here. It is the somewhat forgotten story of Roxalana Druse, the Herkimer County woman who was hanged for murdering her abusive husband over twenty years before the Gillette case. Roxy's story is important because her execution actually paved the way for the electric chair. So without further ado, I hope you enjoy this.

Roxalana Druse: The Forgotten Central New York Murder Case
Posted by Unknown at 10:16 AM No comments: 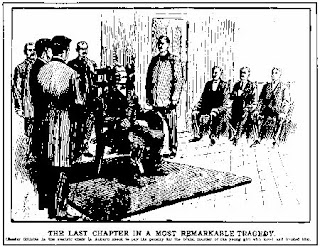 Went to bed at 12:30 and was asleep in a few minutes. Slept soundly until called at 3:45. Feel refreshed and calm. I am surprised that I can look at this matter so calmly. Had communion for the first time. I feel that I am fully prepared to go and meet Jesus. I shall watch for the others.

Was so glad when "Mac" told me that Paul had taken a stand for Christ. This makes me happier than anything else could have done. May the rest be comforted as I have been in these last moments.

Had a very nice little breakfast and appreciate everyone's kindness. They have all been so kind and courteous. I am very grateful to each one. Good morning All.

P.S. If it isn't any extra expense or too much trouble please have "Taps" played at the last.

'Gone to be with Jesus.'

The following passage contained the last words that were written one hundred years ago today by Chester Ellsworth Gillette. He finished the entry just ten minutes before two guards arrived at his cell on Death Row at Auburn State Prison to lead him to the chamber that held the electric chair where he paid the ultimate price for the murder of Grace Brown nearly two years earlier.

Those words can still be read today in the recently published book, "The Prison Diary and Letters of Chester Gillette" by Craig Brandon and Jack Sherman. The diary book basically told the story of Chester's redemption as he acknowledged the pain he caused his family and friends because of his actions and begged for a chance to repay them for everything that they did for him.

Unlike the centennial commemorating Grace's death in 2006, the question here is, how do you commemorate an execution, even if is the execution of a murderer whose actions spawned a classic novel, two movies, and an opera? That's probably one question that is very hard to answer. Hopefully, he may finally have found the peace he was looking for.
Posted by Unknown at 8:18 AM No comments: 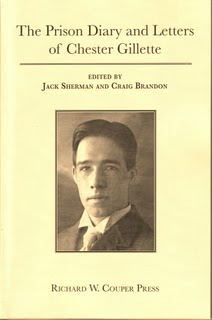 Well, here we are for another year on the Chester and Grace site and this year officially kicks off with the release of the latest Gillette book, "The Prison Diary and Letters of Chester Gillette," as written by Craig Brandon and Jack Sherman and it is based on the diary that Chester kept while awaiting his execution in Auburn Prison and also contains letters that he wrote to family members.

This book is significant from the previous Gillette books mainly because for the first time, we experience the case through Chester's own words and it depicts a Chester that die-hard Gillette buffs didn't know existed. Even though the diary did not contain a confession or an account of what happened to Grace on July 11, 1906 at Big Moose Lake, it does deal with Chester's transformation from a careless, thoughtless individual into a more mature young man who cared about the well-being of his family.

As you know last March, the diary, along with the letters were donated to Hamilton College and were added to its extensive Gillette trial collection that also includes Grace's letters. And also this year is significant because March 30 marks the 100th anniversary of Chester's execution in the electric chair for Grace's murder.

Hopefully this year will also be significant for the fact that my book will also be out. The book will mainly be another retelling of the whole case and contains some new material, including Grace's diary from 1902 and the events that came after the publication of Craig's first book, "Murder in the Adirondacks", including the centennial commemoration of Grace's death in 2006 and the book "A Northern Light". I still have six chapters left to complete but I am hoping to have them completed within the next two months or so.

So, anyway, here was the latest from the Gillette front.
Posted by Unknown at 9:36 AM No comments: 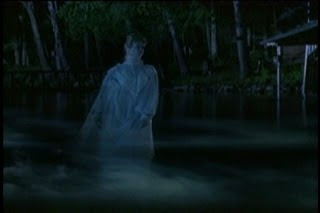 So far there hasn't really been much going on in the world of Chester and Grace but I haven't really been idle as far as they go. As I continue to write the book, I have received some new documents that pertain to Grace from her grandnephew, Robert Williams on July 11 of this year. Among the new pieces of information is a detailed account of Grace's ancestry that dates back to the Mayflower. This information will be in my book, which at press time is called The Murder That Will Never Die: The Murder of Grace Brown. I am still hoping to get the book done and out by the end of the year.

On August 25, almost a year to the day that I went down to Cortland and South Otselic, I finally went up to Big Moose Lake for a day trip. I went on a tour boat ride and went out to the scene where Grace was murdered and it was really lovely up there. The road up to the Adirondacks appeared to be virtually unchanged from when Chester and Grace went up there by train 101 years earlier. I wrote an account of my trip on my other site. And just for the record, I did not see Grace's ghost up at the lake, even though there is a photo of her on this page. The photo of Grace's ghost comes from the famous Unsolved Mysteries episode from 1996.

I am still waiting on several pieces of information but otherwise, as far as the book goes I am in pretty good shape.
Posted by Unknown at 9:46 AM No comments: